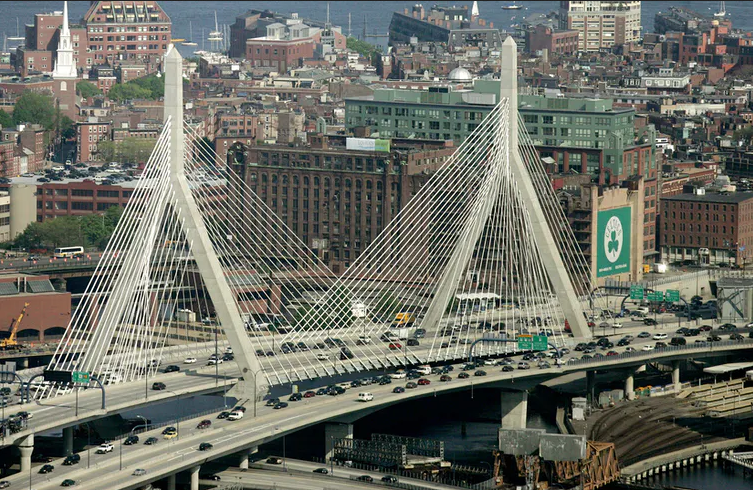 The Leonard P. Zakim Bunker Hill Bridge was part of Boston’s Big Dig, which was infamous for its cost overruns. AP Photo/Steven Senne

The U.S. government may be on the verge of spending as much as US$4.5 trillion in what could be one of the biggest investments in infrastructure and the social safety net in decades.

The House plans to vote on a $1 trillion bipartisan infrastructure bill on Sept. 30, 2021 – which was already approved by the Senate – and may soon follow that with up to $3.5 trillion in other investments. The measures’ passage – and the total to be spent – are still up in the air. But if either or both bills do become law, they would not only reflect massive new government spending that lawmakers see as investment, but also a serious target for fraud.

Most government spending does reach the intended targets – like mass transit, clean energy and broadband internet – but some of the money will undoubtedly be lost to fraud. How much is impossible to predict, but I believe a reasonable estimate based on past spending would put it at around 5%, or $225 billion. That’s equivalent to the gross domestic product of Greece.

I study the problem of fraud in public spending and what governments can do to fight it. Research shows there are measures that can effectively fight fraud in government spending, like increased government anti-fraud lawsuits.

At its most basic, fraud is the use of deception to achieve financial or personal gain. When it involves government spending, fraud occurs when someone diverts money from its intended public purpose.

Common examples of government fraud include companies or bureaucrats rigging the awarding of lucrative government contracts, health care companies falsifying patient data to get higher payments from Medicare or Medicaid, and Defense Department contractors inflating the costs of services.

While it’s common to hear claims that individual fraud in programs like the Supplemental Nutrition Assistance Program is rampant, most fraud involves companies paid by the government to provide public services – because there is so much more money on the line.

About 15% of government spending goes directly to companies through contracting. Even more flows to Medicare and Medicaid providers, which are often private companies reimbursed for the services they deliver.

Part of the problem driving fraud is what economists call information asymmetry. That’s what happens when the construction company or hospital doing work for the government has more information about what they are billing than bureaucrats do. Fraudsters can exploit what they know and the government does not to their benefit by charging more than they should.

It is difficult to measure the exact costs of fraud because those who commit fraud try to conceal it.

One measure of how much the U.S. government loses to fraud is its improper payment rate – a measure of the amount of money the government shouldn’t have doled out, because of, for instance, duplicate payments or ineligible people receiving payments. Improper payments totaled $175 billion in 2019, or about 4% of all government spending.

Different programs have different improper payment rates. Medicare, for example, has improper payments in the 5%-6% range, costing the government tens of billions of dollars per year.

However, improper payments are not the most accurate measure of fraud. They include money improperly paid by accident rather than malice, but they fail to measure fraud that wasn’t caught – which may be substantial but is unknown. There is a constant cat and mouse game between anti-fraud enforcers and fraudsters exploiting new opportunities in the ever-changing regulatory landscape.

For example, the Payment Protection Program – which spent $792 billion helping small businesses endure the economic effects of the COVID-19 pandemic – may have lost $76 billion of that to fraud, according to a 2021 study.

About 15% of the PPP loans given out are suspected of fraud. That’s based on certain red flags, such as filings that include unregistered or recently incorporated businesses, many of the same residential addresses or implausibly high employee salaries.

Other recent stimulus programs have similarly garnered attention for fraud, including the Pandemic Unemployment Assistance program, in which hundreds of thousands of people have had their identities used for fraudulent claims. Ohio alone estimates it lost $330 million to this kind of fraud.

Like other forms of fraud, this problem was largely not due to individual abuse but rather criminal organizations exploiting weak government oversight.

Information asymmetry is one reason infrastructure programs in particular tend to be targets of fraud.

For example, the quality of construction projects is hard to verify. That gives contractors and builders opportunities to skimp on materials or inflate costs to earn higher profits.

Boston’s Big Dig, a $15 billion infrastructure megaproject from the early 1990s, resulted in some contractors being arrested for fraudulently providing substandard materials. A major contractor on the project was prosecuted for delivering adulterated concrete and paid a fine of $50 million.

Furthermore, infrastructure projects are generally awarded to a single company through a bidding process, which can be susceptible to rigging. In June 2021, for example, an Ohio-based engineering company was ordered to pay $8.5 million in fines for rigging several drainage projects in North Carolina.

The U.S. is sophisticated in its rules around bidding, contracting and audits, but cases like that still arise with some regularity.

[Over 110,000 readers rely on The Conversation’s newsletter to understand the world. Sign up today.]

The federal government is not powerless to prevent and detect fraud.

Research has found that many anti-fraud efforts can successfully root out fraud . Indeed, the Department of Justice has found that every $1 spent on health care fraud in 2020 returned $4.30 – an exceptionally good return on investment.

Whistleblowing has proved to be particularly valuable. Under the False Claims Act, individuals who have information about fraud involving government programs can hire their own attorneys and sue on behalf of the government in federal civil court. These whistleblowers receive a share of any money they recover for the government.

My research has found that this can be highly effective at deterring fraud. Under the act, the government has recently recovered more than $1 billion a year, and my research shows that it has saved tens of billions more by preventing fraud from occurring in the first place.

But at least one of the two bills Congress is working on right now includes very little language aimed at fighting fraud.

While the $1 billion package does include additional funding for Internal Revenue Service enforcement, this is about raising revenues, not combating graft, and a lawmaker’s recent effort to include stronger provisions for whistleblowing in the infrastructure bill failed.

Other language in the bill instructs the government to deter waste and fraud but doesn’t specify penalties or how it will be carried out. In fact, the word fraud only appears seven times in the 2,000-page bill.

It is clear that in the current haste to spend federal money, not enough attention has been paid to make sure that it all goes to the proper places. The other, larger spending package is still primarily just a blueprint, with not a lot of legislative language behind it.

Lawmakers would be wise, given how much they plan to spend over the coming years, to include more anti-fraud language in large spending bills. That would help ensure more of these trillions of dollars go to the people and places they say need the support – and not to the fraudsters.